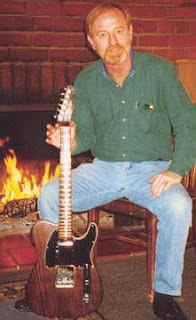 A while after I had some success dealing in celebrity instruments ﻿I received a call out of the blue one day from a fellow I had met at Fender's Custom Shop in Corona, California. He asked me about some of the interesting Fender guitars I had come across and finally got around to mentioning the Rosewood Telecaster which George Harrison had used in the Beatles last live performance.
To make a long story longer, he told me he knew where this guitar was and asked if I was interested in trying to find a buyer. I had read a bit of history on the instrument and was fairly certain that Delaney Bramlett from the '60s group, Delaney & Bonnie and Friends was the owner. The story was that George Harrison enjoyed playing with Delaney and offered him the guitar as a gift.
Although D & B and Friends had only a couple hit songs recognized by the larger part of the listening public ("Only You Know & I Know" and "Never Ending Song of Love") Bramlett was a fairly major influence on British rockers Eric Clapton, Harrison and Duane Allman, who each played in the "Friends" at one time or another. Delaney had cut his teeth on Mississippi Blues and began his professional career as the bass player for the popular television program, Shindig. The band also included piano player, Leon Russell.
After developing a mounting phone bill from speaking to everyone I knew who had information about the Harrison/Bramlett guitar I was finally put in touch with Delaney. We ran up a larger and larger phone bill until I eventually agreed to tentative terms and flew to Los Angeles to meet both the owner and guitar.
I was obviously excited to even touch this guitar since it had been documented in the historic Beatles "Rooftop Session" in the film, Let It Be. George played slide on the Telecaster on the song, "Get Back" and although most of the focus of the film concentrated on singers Lennon and McCartney, Harrison and the Telecaster were given quite a bit of camera time. The documentation on this instrument, which is first and foremost on celebrity-owned pieces was indisputable.
My very first impression was the weight of the guitar. It was incredibly heavy, so far as to be considered uncomfortable to my taste. Still, when an opportunity such as this comes along facts are simply facts. Besides, it was an almost certain bet that whoever wanted this guitar was not going to be gigging with it. Outside of the weight, the back of the neck had the finish removed to the bare wood or very near it. I dismantled the instrument - very carefully i might add - and discovered also that the pickups had been changed and the body was once routed for what looked to me like Gibson-style P-90 pickups.
After setting the pieces on Delaney's pool table, covered in red felt, I painstakingly took pictures of the guitar and its parts. I also had my picture taken by the fireplace (above) and photographed it in his front yard, near a bird feeder (below). Upon closer inspection, you can make out my reflection with the camera in the lower left side of the pickguard (as shown). 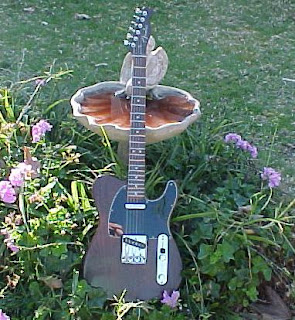 My editor and publisher at vintage guitar magazine were agreed that a cover story on the guitar would be a good idea, not to mention a strong selling point. I ran an ad each month in the magazine as well and for obvious reasons, used this as my eye catcher. I was getting so many calls that my other transactions suffered as a consequence. Since the magazine is distributed in several countries besides the United States and my Internet site also featured this guitar, calls and e-mails were near constant.
Some of the calls were very interesting, like one from a lady claiming to be George's sister-in-law who told me that since the guitar had been a gift, it should be returned to George. And here's silly old me thinking that a person gives up ownership in an item they give as a gift. Besides, I had no way of determining if the call was really George's representative or not. I had tried to contact the ex-Beatle's office but never received any firm confirmation that he or his representatives even received the notice. Believe me, I would have loved to be the person who got George Harrison his guitar back.
Then again, I received another phone call from a woman who claimed that she was the rightful heir to the instrument because a government agency had kidnapped Cindy Crawford, stolen her eggs and made a test tube baby (the caller of course) using George's donated sperm. No, I am not making this up. There are some very, very strange humans in this world... and they must think I am unbelievably stupid.
I eventually found an interested party who made a serious offer. Of course I contacted Delaney and we went back and forth (at my expense of course) with phone calls, FAX messages, e-mails and another cross-country airline ticket purchase. However the day before the deal went down Mr. Bramlett nixed everything. I won't go into details but I was left holding a very large empty bag. I was threatened with a lawsuit, considered one myself and finally, after sleepless nights and constant headaches, had to let it be - sorry, I couldn't resist the pun.
In another twist, I had suggested auctioning the guitar at a large, well known auction site and made arrangements with them to negotiate with Delaney. I was assured by all parties that I would not be left out in the cold on the deal, which - you guessed it - I was. Anyway, the guitar was sold, I learned a "valuable" lesson and left that deal with nothing but a story and emptier pockets. I don't know where the guitar is today but as a writer, I ended up with a nice little tale to pass on to those of us who care about such things.
Rest in peace George... and thanks for letting me play your guitar. 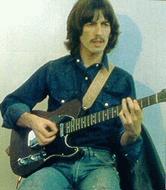 Cashing in on Vintage Guitars 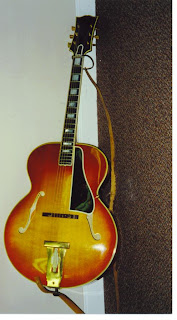 ﻿
The guitar﻿ pictured above is a Gibson L-5, non-cutaway without pickup which belonged to June Carter Cash. She played it on road dates she performed with her husband, the famous Johnny Cash. The strap is a little worn but the tooled leather reads, "Mother Maybelle Carter", June's mother from the original Carter Family recording artists.
I worked for Rose Guitars in Hendersonville, Tennessee while I was attending Volunteer State Community College, studying Journalism in nearby Galatin. One day I came into work after class and found the guitar behind the counter, ready to be re-strung. My first revelation that it might be something special was the mint condition the guitar itself was in. When I saw the strap my natural curiosity leaned toward  wondering if this was actually the "Mother Maybell guitar", the one she had recorded the old standard, "Wildwood Flower" with in the early days of recorded Country music.
Closer inspection led me to realize that this was a newer model L-5 with the better known, fancy tailpiece and could not have been that old. When I asked Jonathan Rose about it he laughed and said he wondered how long it was going to take me to realize what was there in the shop. It turns out, the Cash family, who also lived in Hendersonville, had all of the work done on their guitars by Rose's shop. There were no doubt other shops in and around Nashville who also did work on their instruments but our location was handy and a trust had developed over the years.
While doing a later article on Mother Maybell's original L-5, which rests in the vault at the Country Music Hall of Fame, I realized that her's was a deeper, darker sunburst in what I've heard called "Iced Tea" shading, which comes from years of exposure to stage and natural lighting. The CMHOF would not let me take flash pictures but they were kind enough to let me pick out the "Wildwood Flower" on this historic instrument. I did the same with the June Carter guitar pictured here - after I re-strung it for them.
But the Cash connection doesn't quite end there. I later met Johnny's brother, Tommy while standing in line at the local post office where I was shipping out a guitar. He approached me and said he recognized me from the local TV show I played guitar on and, of course, I knew exactly who he was as well.
As we waited in line, Tommy asked me if I worked full-time at Rose and I explained to him that, like all Nashville musicians, I had a couple irons in the fire and one of them was trading in vintage and celebrity-owned guitars and other instruments. As we talked longer, he mentioned that he had some older guitars and instruments which his brother, Johnny had given him over the years.
My conversation with Tommy Cash culminated in the consignment of the unique guitar pictured below, an Aria Pro II. It had indeed been owned by Johnny and he signed a certificate of authenticity to prove the fact. He also had a story about the inlay work and the wookwork on the heel of the guitar, which had been done by the brother of Arthur "Big Boy" Crudup. Arthur wrotes song for Elvis Presley including "That's Alright" and "My Baby Left Me" during his Sun Records years. 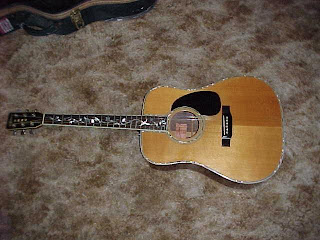 The guitar had a hard time bringing the price we settled on and when I finally found a buyer, Tommy backed out of the deal because his brother's health had taken a turn for the worse and he was more interested in keeping the relics he had been given over the years. I returned the guitar with no hard feelings and told him I realized that the significance of a gift from a loved one was certainly understandable.

Of course, Johnny passed away in 2003 just four months after his beloved wife June died. Before he passed on though, I went by his place once a month and dropped off the latest copy of Vintage Guitar magazine for them. I always put a note in the magazine saying something like, "I've put Elvis & Carl Perkins on the cover of this magazine, it just wouldn't be complete without you there as well." I had a standing order from the publisher that if I could get Johnny Cash to agree to an interview we would most certainly feature him on the cover.

After a few months of this in the late '90s I got a message from his property's manager. He said that Johnny's health and scheduled business simply would not allow for time to do this. He also said John appreciated my interest and that if circumstances were different he would be glad to do so. At that I left him alone and decided I had had my brush with the Cash enterprise. It was time to let a man who had finished his labors rest in his peaceful setting on Old Hickory Lake.
Posted by Dave Kyle at 11:28 AM 1 comment: