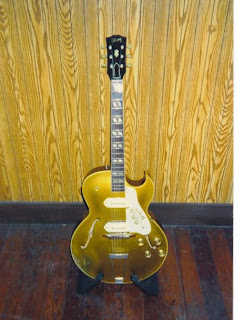 Most of us who show an interest in older guitars, whether as collectors, players or admirers start our education by trial and error. This story is about exactly that, but mostly error. The guitar pictured above is one I found when I first began my quest for the ultimate guitar; a quest which I might add never becomes fulfilled except on rare occasion and then only briefly. It is a 1952 ES-295, most famous because of its use by Scotty Moore with Elvis Presley.

That sort of information is ingrained into my thought pattern these days but at the time I found it I was not at all familiar with many makes and models of the plethora of guitars on the market. Having owned and played a '69 Gibson Les Paul Deluxe gold top for several years, I thought that possibly this was an early version of an archtop Les Paul. Don't laugh, I've already admitted my ignorance and I'm about to tell you more so hopefully you won't make the same mistakes I did.  After all, remember the Les Paul Sgnature model? An honest mistake from a rookie as you can hopefully see from the picture below: 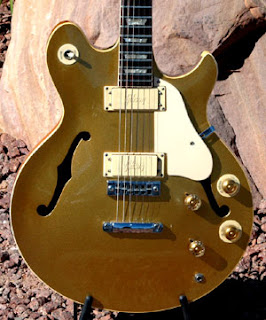 Well, I'm not as easily confused now as I was then but to a novice eye, this is an easy mistake - and believe me, I had a novice eye. I knew about only a few guitars then , as most of the general population still does. I knew Gibsons, Martins and Fenders were all considered good, well made guitars used by professionals. Like many though, I wasn't keenly aware of the vast difference in the range of quality within those companies. I also had an inkling about brands such as Gretsch, Rickenbacker, Guild and Epiphone. Enough knowledge to be dangerous in other words. Had you shown me a D'Angelico or a Stromberg I would have most likely asked if they made a solid body version.

My "collection" at the time was generally a few workhorse guitars that I used for live gigs or the little bit of recording I had begun at the time. As you can see from the picture I proudly snapped below, I had a Fender Stratocaster that I used most of the time, a Martin acoustic, a Gibson Chet Atkins CEC, a Hagstrom bass, an old Multi Chord pedal steel and the odd man out, a Gibson ES-295. 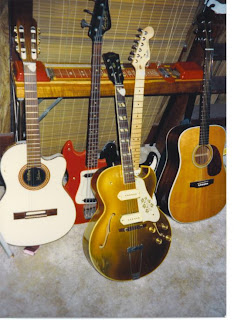 The main attraction to the 295 was, like most things in life, the price. A friend had called me and told me of another friend who had an old Gibson for sale. I won't divulge the asking price but let's say I got it for a number in the high two figures. No, you read that right TWO FIGURES. The reason the other guy had called me in the first place was that he couldn't afford it - and I had to borrow a few bucks myself to get the deal done. Don't believe anyone who ever tells you that being a musician is a good way to make money.

I obviously knew nothing whatsoever about this guitar or even what it was besides a Gibson. There was a guy with a music store in the town I lived in who did know though. I was on my way to George Gruhn's guitar store on Broadway in Nashville when I stopped in the former fellow's shop. I thought he might have some idea of its value and I was going to offer it to George, as I had done with a few old guitars prior to this.

My heart's desire was a Fender Telecaster with a maple neck. I grew up... ( well, as the old joke goes; SON, "Dad I want to be a musician when I grow up." DAD, "Sorry kid, you can't have it both ways.") ...anyway, I came of age learning how to play guitar on my Dad's old beat up guitar with most of the finish gone, a 1953 Telecaster. That's an entirely different sad story but it did give me the feel for a Tele early on. Lots of people find that particular model Fender difficult to play but since I had learned on one, it felt like home to me.

When I showed the dealer the Gibson I could see that I had his full attention. He offered to buy the guitar at what I thought was a reasonable price. However, my desire to have a Tele again was such that I thought George Gruhn would pay more and possibly allow me to buy a used Tele. The store owner was not to be deterred by this and mentioned that he had a '69 Tele with a maple neck that he would allow me a trade on if I kicked in a little. Since I had just blown my "savings" and the money I borrowed to buy the Gibson though, that wasn't an option. After much discussion he finally offered to do an even trade, throwing in that he would probably loose money but he was trying to complete his Gibson collection.

He did point out some things that were not ideal for this particular instrument. First, the bridge and tailpiece had been changed. It was a Gibson tailpiece, probably from an ES-150, but even though this particular configuration was better for intonation, it was incorrect. The original was (and is) called a trapeze bridge and is like the example shown below on an early Les Paul model: 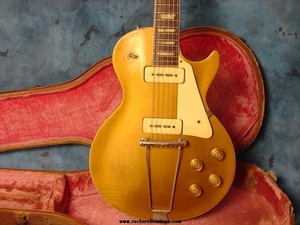 These bridges are impossible to keep in tune and the most difficult things to find if you ever do find one are the small "feet" on which the bridge/tailpiece use to rest on the guitar's top. He also pointed out that the gold finish had started to turn green - a condition caused by moisture from the skin reacting to the copper in the gold finish. I now know that some collectors value this and search out "green" gold tops.

One very interesting thing about this guitar is the serial number. Of course I knew nothing about numbers at that time and Gibson's numbering system has changed more times than even the experts of the day could keep up with. Thankfully, George Gruhn and Walter Carter have done some amazing research on this subject and with the help of their book, Gruhn's Guide to Vintage Guitars and Vintage Guitar magazine's Official Vintage Guitar Price Guide, buyers and sellers no longer have to be in the dark about what they have. The serial number on my Gibson ES-295 was one I will always remember, A12345. According to Mr. Gruhn's book, this number is from 1952, the first year of issue for the ES-295.

One question is probably on the minds of most readers who have come this far; what is today's value? The pat answer is of course, I don't know. The market on such things changes too rapidly to keep up but let's assume that it is well above the two figures I paid. The 2008 version of VG's Price Guide lists models from 1952 to 1957 at somewhere between $7500 and $9000, depending on condition. The reissue models made in the '90s listed at between $2300 and $3000.

Keep in mind however a few things: Dealers do not pay retail for instruments. They have to make a profit and keep the lights on. Also, a guitar, or any commodity, is only worth what someone is willing to pay for it. The prices listed are suggestions as to what a guitar might bring should you, A.) be lucky enough to find one, and B.) find someone willing to buy one. Old guitars are very attractive to people like me - and probably you too if you're reading this - but let's face it, you're not going to want to carry a nearly sixty-year-old guitar to a gig are you? Maybe you have a place to show it off in your home or business. Perhaps you are the world's biggest Elvis fan and you want to have each and every kind of instrument the King used in his music before he left the building. But chances are, you would just like to play one, hear one, touch one.

The fact is, this particular guitar was not made for my kind of playing on any steady basis. On the other hand, the Telecaster was and is. The same 2008 Price Guide listed '69 Telecasters in Blonde or Sunburst (mine was black) at between $6000 and $7000. I played a lot of gigs with mine and when I sold it, I got much more than my initial two figure investment. The picture below shows me doing a gig and proudly playing the guitar, something I wouldn't have done with the Gibson. It's all in the eye (or ear) of the beholder in the end... and don't I look happy? ...and young? 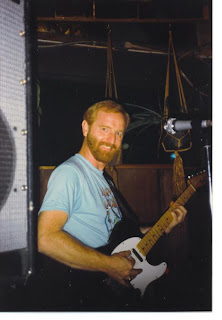