You may have read in some of my earlier blogs that I did some consigning of guitars for the late Delaney Bramlett. Although his most notable guitar was probably the George Harrison Rosewood Telecaster, Delaney had some real gems in his collection. I'll pass on a few that might bring a gleam to your eye.

Our first in person meeting was at his place called the Rock 'n' Roll Ranch in the San Fernando Valley area of Los Angeles. I had been living in Nashville for a number of years at the time and like many people from "Back East", I thought it was all orange trees and sunshine here 24/7/365. Each time I had come to California I thought it was a beautiful place to live and eventually, I became a citizen of the Golden State myself. But at the time I met Delaney I had some learning to do about the climate.

He had offered to put me up in the pool house of his "Rock 'n' Roll Ranch" as he called it and I jumped at the chance. There was a bed, a nice view of the San Gabriel Mountains and a pool right outside the door. It was December and maybe a bit too cool in the daylight to swim but still, better than fighting a scattering of snow or worse yet, ice in Tennessee. Then the sun went down. The main house had a fireplace and we had been sitting around all day inspecting and playing his various guitars. Jet lag began to catch me up a bit so I opted to retire early and went to inspect my quarters.

The pool house had been warm in the afternoon but since the sun was no longer contributing to the heating, things had begun to cool. Not to worry though, Delaney had a space heater. He said it would take a while but should warm the place up nicely. After two hours I determined that the cold air it was blowing out was dropping the temperature in the room quicker than the chill breeze outside so I turned it off.

I had been kindly given two blankets to keep me cozy but after lights went out in the main house I started worrying. The pool house just kept getting colder and colder. I decided to put my clothes back on and sleep in them. Then I decided to put on my leather "Vintage Guitar" jacket with the wool sleeves, then my 100% wool hat I had picked up in Italy. I even put my shoes on under the covers and I was shivering like a duck trying to pass a peach seed. Somewhere in the middle of the night I moved to the couch in the pool table room and ended up cuddling Delaney's chiwawa for warmth. I found out first hand about California winter nights and gained a new respect for the homeless people living out in this weather.

But on to the guitar stories! There among his collection of instruments he used, had been given and found in dumpsters were a few guitars of historic importance ...at least to me and other like minded guitar heads. The first to catch my eye was a Gibson Les Paul Special. With its distinctive double-cutaway body and P-90 pickup, these were always some of my favorite guitars. I had a two-pickup model that I dearly loved and got a marvelous tone from so this one grabbed me. 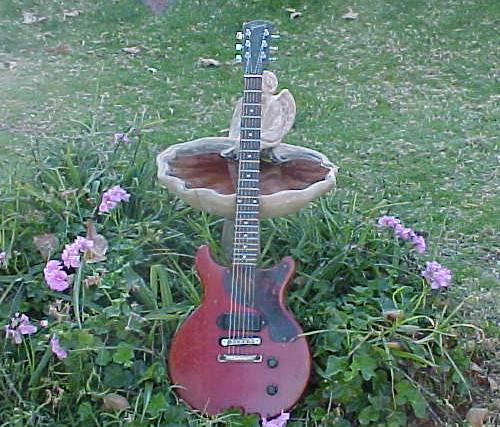 But little did I know, the the history was the real catcher here. This was Duane Allman's first guitar, the one his mother bought him to keep Duane and Gregg from fighting over the Fender Gregg had been recently given as a Christmas present. It didn't turn out to be a gift to Bramlett from Duane, more of a Karmic happening that brought them together. While playing on the road together the two had been talking about their first guitars and how they wished they had them back. Don't we all have that same wish?

According to Delaney, Duane was always up early in the morning, ready to go out and do something, anything. Delaney, on the other hand, was a late sleeper (which I can testify to) and rarely wanted to get up before the crack of noon. But the conversation of the night before had led to the fact that Duane had pawned his guitar in Atlanta (the city they were in at the time) and couldn't remember exactly where he had pawned it. Bramlett decided to rise early on this day and go looking for it in the unlikely case it may still be there and they both agreed to meet in the morning to do so. Duane however wanted to sleep that day.

Well, to make a long story longer, Delaney found this guitar and thought, whether it's THE one or not, it's a good bargain at around $100. When Duane awoke, he eyed the guitar across the room for a while and then asked if there was a large scratch on the back, just along the top rim of the guitar. Sure enough, there was. Also sure enough, Duane Allman had put that scratch there himself by accident and had no doubt it was his. Gregg Allman confirmed this story and with the help of a certificate of authenticity, I was able to find Delaney a buyer for it.

Ah, but it doesn't end there. After much begging, cajoling and pleading Delaney refused to give or sell Duane the guitar. Allman didn't hold a grudge in the long run and in some strange way, seemed just to be glad the guitar was "found" again after his careless and forgetful pawning incident. In a strange twist, Delaney told another story about another of Duane's guitars, his '65 Fender Stratocaster, pictured below in Delaney's yard: 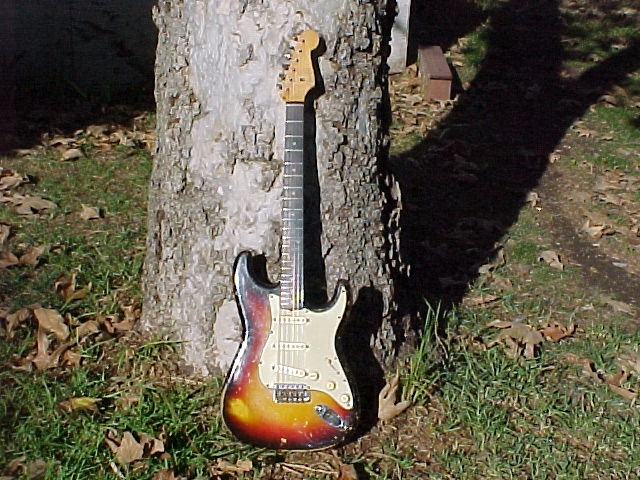 In this story, Duane came to Delaney's hotel room door with the Strat wrapped in a pillow case and asked him to keep it for him. He agreed but asked Duane why exactly he wanted him to hold the guitar, a question that was never in Delaney's mind satisfactorily answered. Later on, Allman mentioned the guitar and Bramlett told him to come get it any time. Duane surprisingly told him to keep it, he didn't want to use it any more.

Another time, Delaney and Eric Clapton were driving up one of the canyons in the Hollywood Hills and spotted a guitar neck sticking out from a trash bin. The resulting guitar is the Gibson Les Paul pictured below: 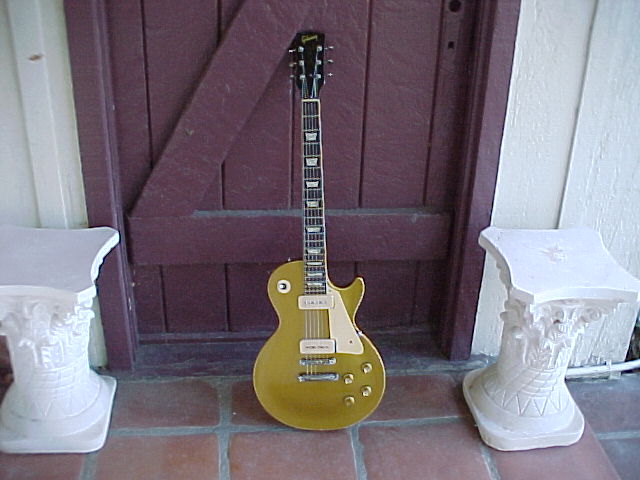 I know these stories get a little nebulous and I had doubts myself. The Les Paul for instance seems to be one of the early '68 re-issues, not the earlier Gold Top Delaney claimed. There was, according to him, an ongoing battle between Delaney & Clapton as to who got to keep the guitar. Delaney obviously won that one if it happened. Since he and Eric fell out sometime back the chances of getting Clapton's story are slim.

Still in all, Harrison most certainly did give him the Telecaster. The Fender Custom Shop made a near perfect replica of the Allman Strat and did their research based on pictures of Duane playing that model in Fame Studio, Muscle Shoals, Alabama. Eric, Duane, Harrison and a ton of others played with Delaney and if I may say so, his voice is one of the finest Blue Eyed Soul instruments ever recorded. He was a greatly talented individual and it was a privilege for me to play and offer these instruments. But I will never, NEVER sleep in someone's unheated pool house in January again!