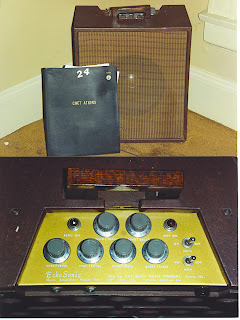 After many starts and stops, the book on Ray Butts, who invented the EchoSonic amplifier (used by Scotty Moore, Chet Atkins and other trend setting guitar players) and the Gretsch Filter'Tron humbucking pickup is back on track.

With the able assistance of Tim Masters, one of the world's best known proponents of the EchoSonic, and Katha House, Ray's daughter, I am atempting to write a history of the man, his inventions and the music and people they influenced.

For guitarists, audiophiles and people who simply loaved the unique sounds of Elvis Presley's "Mystery Train" or Chet Atkins' "Mister Sandman" this book hopes to uncover the mystery of one of the world's rarest amplifiers - the first with built in echo.

Keep watching for further details!
Posted by Dave Kyle at 11:25 AM