﻿Scotty Moore will always be thought of first and foremost as Elvis Presley's guitar player. Of course anyone who has done some research on Elvis realizes that without Scotty, the whole thing may not have even happened. Moore was a huge part of Sam Phillips' Sun Recording Studio long before there were any stars or million selling records. Working as a session musician and all around sounding post for local talent, Scotty and stand up bassist, Bill Black agreed to take on the Elvis project and see what became of it. 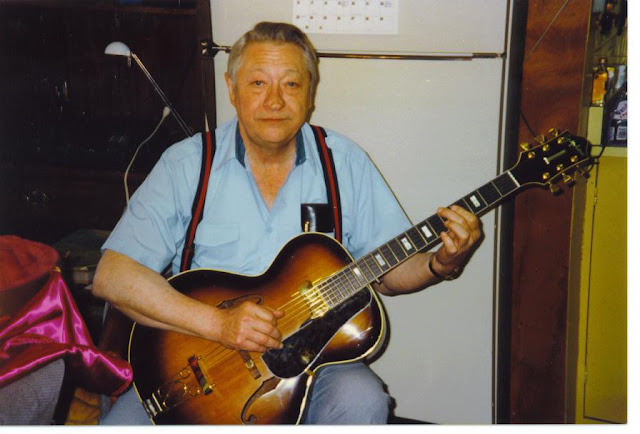 I met Scotty in his log cabin out on a hill in the woods outside Nashville, where he has lived for a number of years since moving from Memphis. After all the adulation poured on him through the Elvis years, the endless touring in the '50s and the throngs of people wanting to interview him about "...what was Elvis really like?" he had wisely turned a shy face to most such requests. Since I wrote about guitars though, he was kind enough to allow me into a glimpse of his world at the time.

When I asked him about some of the older guitars he still had the first thing he brought out was a 1938 Epiphone Spartan with a floating D'Armond pickup. Scotty told me this was his favorite guitar to sit at home and play and the above picture shows him doing just that, sitting in his comfortable kitchen. When he found this instrument it was in pretty bad need of restoration and the Gibson paint department in Nashville did a wonderful job of making it look like a new, old guitar.

Like many of us, Scotty is an admirer of Jazz and mentioned to me that he had a lot of respect for fellow Gibson guitar endorser, Tal Farlow. The Epiphone, having a smaller body is a good, relaxing guitar to find new licks on. Scotty is not at all settled into just being "Elvis' guitar player from the '50s", he is always searching for new projects, new sounds, all the things that the guitar player finds endlessly when he has a real love for the instrument. Another fine example of Scotty doing just that is the picture I took of him at the mixing board of his home studio below. 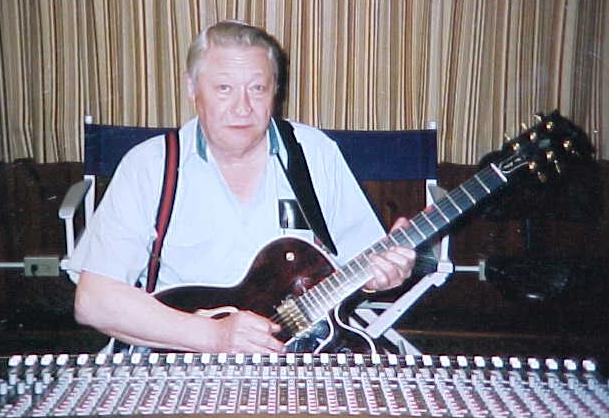 In the studio picture Scotty is shown playing his Wine Red Gibson Chet Atkins model, the guitar he preferred at the time. The pickups have been changed from stock Gibson pickups to special humbucking pickups designed and built by Ray Butts, who also invented and produced the EchoSonic amplifier that Scotty made so famous in songs like Mystery Train using the built-in tape echo Ray had patented. The amp shown below was in Ray's shop when I visited one day. 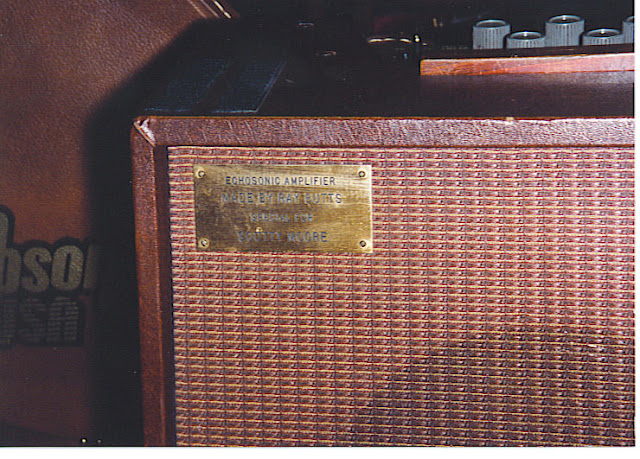 Ray asked if I would like to play through it and like any fan of guitar playing I jumped at the chance. It didn't make me sound like Scotty Moore but then, nobody does. Still it was such an honor to play through the very amp I had seen on all the early television shows and heard on all those fabulous Sun Records. Then Ray asked if I would like to meet Scotty, which of course got me even more excited. Ray finally introduced us at the Chet Atkins Appreciation Society that next summer to my everlasting appreciation. Although I didn't usually get my picture taken with people I interviewed or played music with out of trying to maintain a certain professionalism, I just couldn't resist. My childhood dreams were a match to another of my favorite guitar players that day. To quote the Rolling Stones' Keith Richards, "...I didn't want to be Elvis, I wanted to be Scotty Moore!"


﻿﻿﻿﻿﻿﻿﻿﻿ ﻿﻿﻿﻿﻿﻿﻿﻿ I wrote a cover story about the guitars of Elvis Presley for the Vintage Guitar, August, 1997 edition and included a section called Remembering Elvis featuring all of the guitar players I could find who worked with the King of Rock 'n' Roll in a live setting. These included, James Burton, John Wilkinson and Scotty Moore. Unfortunately that issue is nowhere to be found on the net to link to but for an accurate, in depth description of Scotty Moore, please visit the Scotty Moore Official Web Site at
http://www.scottymoore.net/index.html
Posted by Dave Kyle at 10:28 AM